In my last two articles (here and here) I talked about IT’s ongoing struggles to meet business needs. Over the past several decades, many studies have explored these concerns—performed by different groups, asking different questions, for different purposes—but with remarkably similar results.

Taken as a whole, there are two notable results from this large collection of studies:

(1) Overall, between 50% and 80% of all IT projects have measurable delivery issues.

(2) Perhaps more surprising, the results have remained basically unchanged over several decades. During this time, almost every facet of the IT industry has changed, and many of these changes were intended to solve exactly the problems that these studies were measuring—with little apparent effect.

Such results would be hard to believe (and easy to argue with) in any given study. When taken together, though, across such a spectrum, over so many years, it’s just hard to ignore the fact that there’s something amiss in software land.

Probably the best known of these studies (also the most continuous, and possibly the most contentious) is the CHAOS report, updated annually by the Standish Group. Here’s a refactored view of a small slice of their data from 2015, as reported by InfoQ: 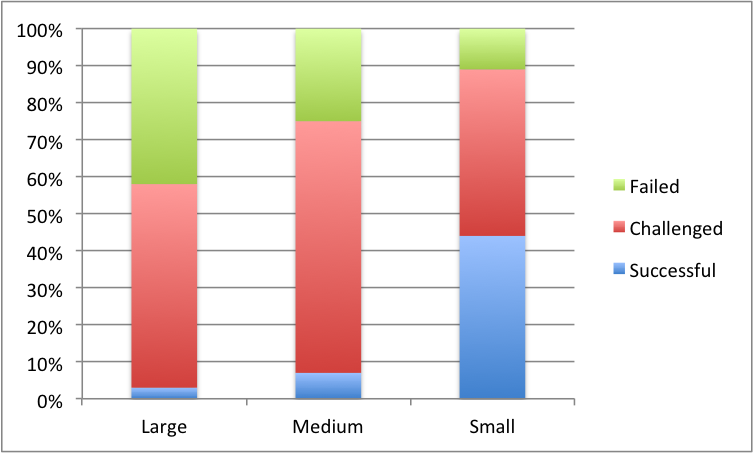 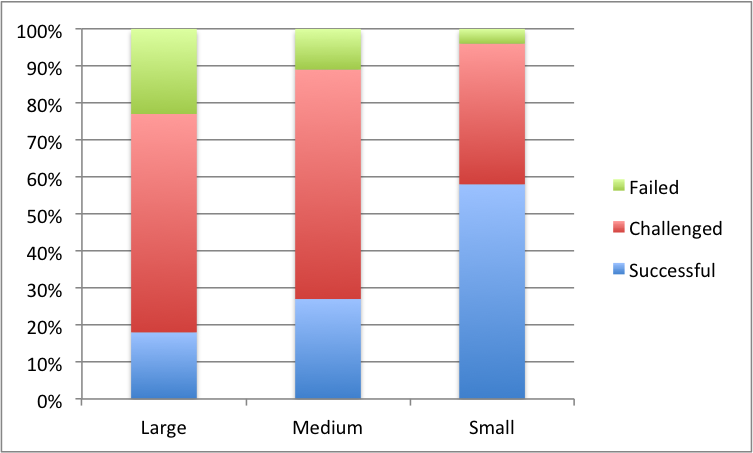 Leaving aside certain questions about the survey methodology and specific results, let’s just take a 30,000’ view of what’s going on with these six cases.

No wonder, in one study from 2010*, 75% of respondents felt that their projects were “doomed right from the start.”

Agile is better, and significantly so.

Why is agile better? Three contributors some to mind:

It would seem, then, that much of the impact of Agile methodologies is largely a result of better managing business expectations!

These are not the same thing. Projects are largely an organizational funding construct, while systems are things that projects deliver.

So, at some level, studies like this are measuring the wrong things. Or, at least they’re not measuring the things that businesses ultimately need the most.

This is, in my view, the core flaw in such studies: they measure IT performance against project expectations rather than the resulting systems’ ability to meet business needs over a complete systems lifecycle (which is not the same as a software development lifecycle).

Studies of this kind tell us little about whether and how well Agile facilitates true business agility.

Given the caveats above, project success is still important. As a business investment in IT, a project is something we always want to succeed (even if the definition of success doesn’t match that in CHAOS).

Toward this end, the data shows that while Agile is better, it’s not enough better.

Even in the best case scenario—agile methodology for small projects—40% of projects exhibit difficulties (ie, way too many). This is less awful, but maybe not quite good.

If my theory is correct, that the root cause of most IT project failures is actually business and/or system complexity, this is exactly what we’d expect to see! All else being equal, smaller projects are almost always less complex.

As IT leaders, these observations lead us to a couple of easy decisions:

[Yes, I’m an architecture consultant, and this is a wanton act of (mostly) shameless self-promotion.]

And to one slightly harder decision, or at least harder to accomplish:

This last point is critical. I’ll explore this thought further in future posts.

References
* Doomed from the Start? Why a Majority of Business and IT Teams Anticipate Their Software Development Projects Will Fail, Winter 2010/2011 Industry Survey. Geneca LLC, 2011. 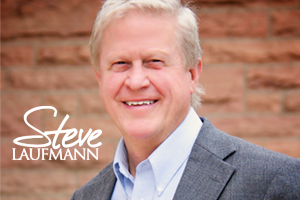